View the barometer on slideshare


QIMA 2016 audits and inspection demand gives an indication of the attractiveness of each sourcing regions for global brands and buyers. After several slow quarters in the wake of increasing working costs and strong currency, China picked up pace again in 2016 (+12.5% YoY). It even outpaced some of its declared challengers, as Vietnam saw a more modest +5% growth, and Thailand was flat YoY.

South of Asia continues to grow as a manufacturing powerhouse, especially for the Textile industry, as India and Pakistan saw audits and inspection volumes surge respectively +30.5% and +18.2% in 2016. 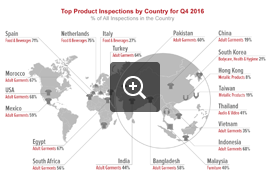 
The state of structural safety remains troubling as 63% of factories audited in 2016 by QIMA were found in need of remediation, while the number of compliant factories has gone down from 41% in 2015 to 37%. Critical issues were found in 3% of factories, a slight improvement compared to the previous year.

Meanwhile, ethical compliance continues presenting challenges: data collected from QIMA's ethical audits during 2016 shows that a third of factories only were found compliant. While the number of critically non-compliant suppliers decreased (27% in 2016 vs. 41% in 2015), a large portion of suppliers are still ranked as "Amber", indicating the need for improvement in the medium and long term. Among the top concerns in ethical compliance are a range of labor violations, including forced overtime, sexual harassment, child labor, forced labor, and exploitation of refugees.

Environmental compliance was also uneven throughout global supply chains in 2016. According to QIMA data, over 36% of audits failed this year, a 5% increase from 2015. Overall, many brands are not prepared to make a commitment for ISO 14001 compliance right out of the gate, instead choosing to aim for the minimum legal standards applicable in their sourcing country.

Nevertheless, more companies are committing to sustainability objectives in both short and long term, setting objectives for 2020 and beyond. "Supplier awareness and cooperation is crucial for progress", said Sebastien Breteau, QIMA’s Founder & CEO. "We have created training and workshop programs to educate both clients and suppliers about ethical, structural and environmental compliance, and are expecting an increase in demand for similar programs throughout 2017."


Overall, 2016 has seen a deterioration in manufacturing quality for consumer products worldwide: QIMA failure rate for product inspections in factories has grown by +8.8% in 2016 vs. 2015, with 35.8% of all inspections returning beyond acceptable level of defects.

Made-in-China manufacturing quality did comparatively better, and remained stable YoY with 32.4% of all onsite inspections finding more defects than allowed, while Vietnam showed a modest improvement, driving the percentage of failed inspections down to 29.0%, from last year’s 35.1%. By contrast, South Asia saw quality degrade significantly across the board, with India, Bangladesh, Pakistan, and others seeing double-digit increases in inspection failure rates.

Among the industries covered by QIMA data, the textiles sector was the most prone to quality problems, as 41.6% of inspected products came short of specifications. Toys and Juvenile Products, in contrast, saw manufacturing quality slightly improve by 3pts, to 30.3% of rejected inspections.

Contrasting with the degrading manufacturing quality levels in factory, 2016 has seen rather promising results on product safety and performance testing in lab: QIMA lab tests failure rates overall have decreased by -11.4% in 2016, with 3.3% of all tests failing. It would appear that while brands and manufacturers have gotten better at properly designing and conceiving their products to comply with international standards, it is when mass production starts that most quality issues arise.

Furthermore, a look past this overall encouraging figure for lab test results shows a more disparate reality. For instance, as demand for REACH-related testing in the EU has skyrocketed this year, test results have not been that good, with failure rates tripling YoY. The highest failure rates are found around phthalates testing, with as much as 5.4% tests not meeting safety requirements, indicating potentially harmful products.